A History of Service

While many of the details are lost to history, records show that Veterans the Revolutionary War – including former Hessian mercenaries – helped grow Manheim and its economy, leading to Manheim’s incorporation as a borough in 1838. Since then Manheim’s citizens have answered the Nation’s call for all the major conflict. 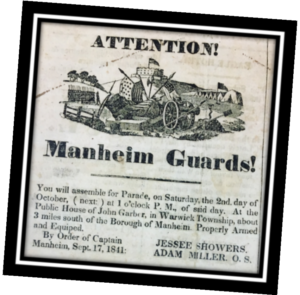 During the Civil War, approximately 179 men from Manheim and the local area served in the Union Army. Captain Justus F. Diehm formed Company D, the 178th Regiment of the Pennsylvania Volunteers, which started with 53 local patriots and drilled in town before marching off for service. Families and loved ones of service members also did their part, starting the “home front” tradition through their generous donations and by sending care packages to those far from home. 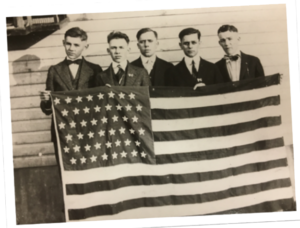 The bloody First Wolrd War had been raging for three years before America’s declaration of war in 1917. About 152 men from Manheim and the vicinity served in uniform, and 12 made the ultimate sacrifice for freedom. The local American Legion Post was named after Ammon K. Gibble, a local famer who died of wounds suffered during a German attack in the Argonne Forest. Gibble had been serving with the 28th Infantry Division of the Pennsylvania National Guard. 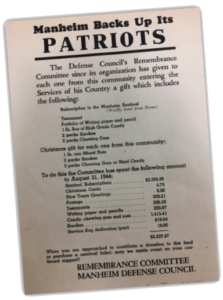 A generation later, hundreds of local men and women volunteered and were drafted to serve in the armed forces again.  The few surviving Veterans of the Second World War are justly proud of their time in uniform, and rightly earned the moniker “The Greatest Generation.” Unfortunately, 23 sons of Manheim – Soldiers, Sailors, Marines, and Airmen – made the ultimate sacrifice in the European and Pacific theaters of war. Another 29 were wounded in action and three spent time in prisoners-of-war camps.

The nature of conflict changed after World War II, but patriots from Manheim and the local area continued to serve and to receive the support of their community. During the Korean War, two local boys died while wearing the uniform, but still today another three remain missing-in-action / presumed dead. After 50 years, the Veterans of the Vietnam War have finally been earning the respect they deserve for doing their duty. Marine Private First-Class Melvin R. Buckwalter III and Army Private Martin G. Sauble, Jr. never made it home. Both were killed fighting in separate engagements in Vietnam during 1968; neither was older than 21 years.

In the past 50 years, men and women from Manheim have been in the service of the Nation during every conflict. Since 9/11, dozens of local residents have also served honorably in Iraq and Afghanistan, either by volunteering for active duty or as reservists and National Guardsmen mobilized for duty. One long-time Manheim resident, Army Sergeant First-Class Knier was serving with the 82nd Airborne Division in Iraq when he was killed by an improvised explosive device (IED) in 2006. While some have made the ultimate sacrifice, everyone who has ever worn the uniform has had to sacrifice something in order to honorably discharge their duties. 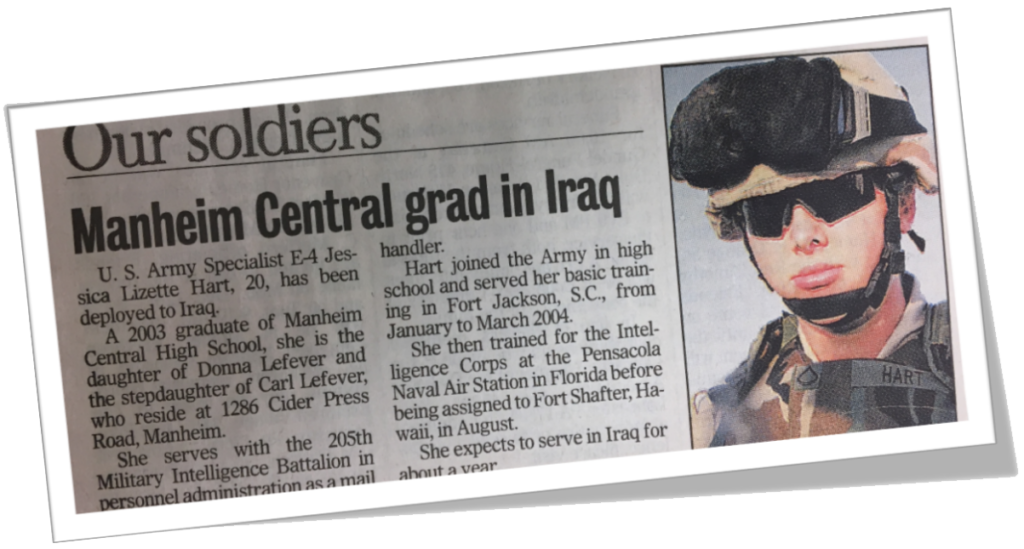 Veterans in the Community

The selfless service of Manheim’s Veterans often continued after their time in uniform. With their sense of duty, self-discipline, and mission-focus, Veterans have made significant contributions to the community of Manheim. Many started or managed successful businesses. Others have volunteered their time to support community organizations and local charities. Some have even served as municipal officials or held elected office.

The willingness with which our young people are likely to serve in any war, no matter how justified, shall be directly proportional as to how they perceive veterans of earlier wars were treated by their nation.

To honor the gallant service of the local Veterans, the Manheim Veterans Memorial Committee (MVMC) was formed to create a proper memorial easily accessible to borough residents and visitors alike. The new memorial will consolidate the historic plaques and markers previously displayed in other parts of town and serve as a repository for the borough’s 250th anniversary time capsule.

The idea for the plaza was first discussed in October 2015 by members of the Manheim 250 Committee which was organized for the borough’s 250th anniversary celebration in 2012. Manheim borough council president Carol Phillips, who also served on the Manheim 250, acknowledged that “There’s a strong sense among our committee that we need to recognize those who serve and have served their country.” 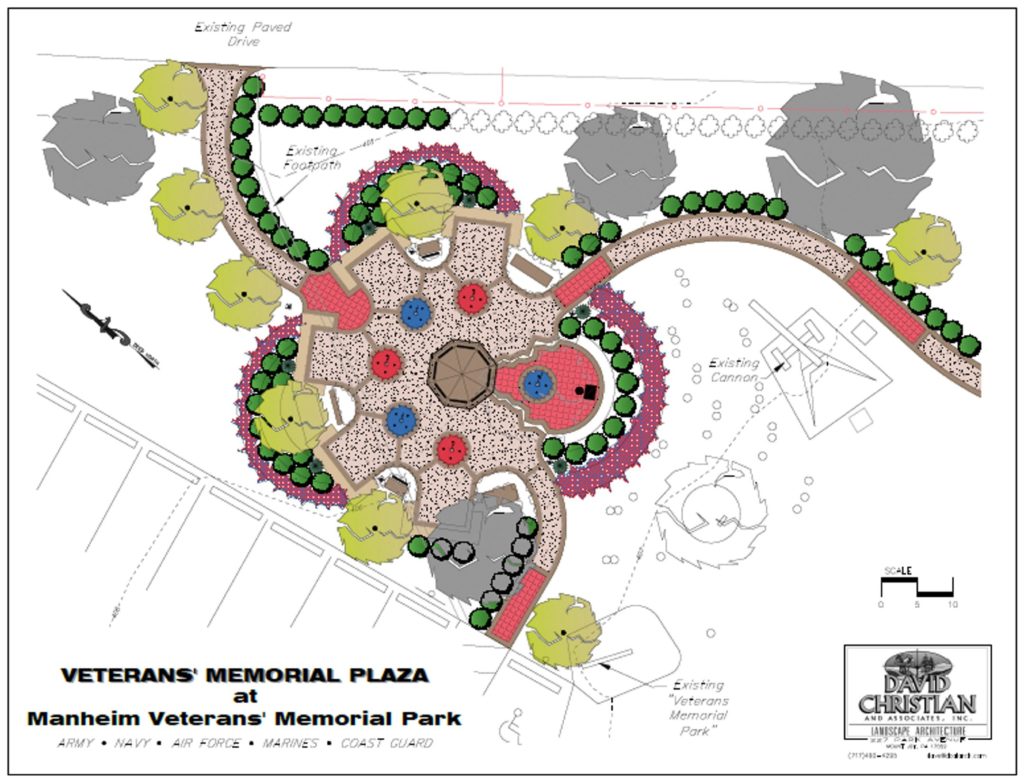 The design for the memorial plaza was created by landscape architect Dave Christian of David Christian and Associates in 2015 with input from representatives of the Manheim VFW Post, Manheim Legion, and Manheim 250. The plaza, shaped like a gear, will contain a U.S. flag in a central stage area and individual flagpoles and flags for each branch of the armed services: Air Force, Army, Coast Guard, Marines, Merchant Marine, and Navy. The plaque bearing the names of Veterans that is currently located in the hall outside the borough office will be placed in a central gazebo. There will be a seating wall along the edge of the plaza, and a textured concrete walkway will connect the plaza to the parking lot and sidewalk on Memorial Drive.

How You Can Help 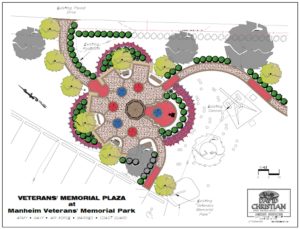